Talk: Encounters of Shoah and Nakba in Palestinian and Arabic Novels

Accueil/Actualités/Talk: Encounters of Shoah and Nakba in Palestinian and Arabic Novels
Précédent Suivant

Talk: Encounters of Shoah and Nakba in Palestinian and Arabic Novels 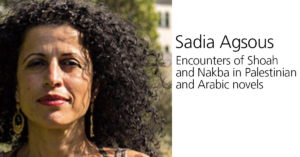 Hosted by the Institute for Holocaust, Genocide, and Memory Studies at UMass Amherst

The Shoah is a theme which is present in the Arabic novel, spanning a broad geographical space from North Africa (Boualem Sansal, Anouar Benmalek) to the Middle East (Ghassan Kanafani, Rabai al-Madhoun, Elias Khoury…). This talk will focus on the articulation of the Shoah in the Palestinian and Lebanese novel since the 1960s. Indeed, the Palestinian novelist Ghassan Kanafani seems to be the first Arab author to have presented a Jewish-Israeli character in his novella, « Return to Haifa » (1969) which was followed later by other Palestinian writers and by the Lebanese writer Elias Khoury. The particularity of these literary works is that they convene both the Shoah and the Nakba for an encounter of painful memories shared by Jews and Palestinians that only literature allows and admits at the present time.

Sadia Agsous is a postdoctoral fellow at The French research center in Jerusalem (CRFJ) with the support of the Fondation pour la Mémoire de la Shoah. Her research is focused on the cultural production (Arabic-Hebrew) of Palestinians in Israel (literature, cinema and media), on the Palestinian translators of Hebrew literature and on the Holocaust in the Arabic novel. Her book J’écris en hébreu, mais en arabe: « L’identité palestinienne à l’épreuve dans l’écriture romanesque en hébreu » is under contract with Classiques Garnier (2019).