Accueil/Ouvrages, Publications/Histories of the Jews of Egypt – An Imagined Bourgeoisie, 1880s-1950s
Précédent Suivant 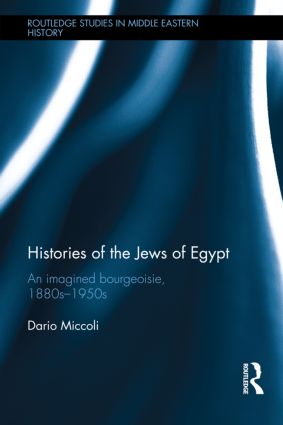 Up until the advent of Nasser and the 1956 War, a thriving and diverse Jewry lived in Egypt – mainly in the two cities of Alexandria and Cairo, heavily influencing the social and cultural history of the country. Histories of the Jews of Egypt argues that this Jewish diaspora should be viewed as “an imagined bourgeoisie”. It demonstrates how, from the late nineteenth century up to the 1950s, a resilient bourgeois imaginary developed and influenced the lives of Egyptian Jews both in the public arena, in institutions such as the school, and in the home. From the schools of the Alliance Israélite Universelle and the Cairo lycée français to Alexandrian marriage contracts and interwar Zionist newspapers – this book explains how this imaginary was characterised by a great capacity to adapt to the evolutions of late nineteenth and early twentieth century Egypt, but later deteriorated alongside increasingly strong Arab nationalism and the political upheavals that the country experienced from the 1940s onwards. Offering a novel perspective on the history of modern Egypt and its Jews, and unravelling too often forgotten episodes and personalities which contributed to the making of an incredibly diverse and lively Jewish diaspora at the crossroads of Europe and the Middle East, this book is of interest to scholars of Modern Egypt, Jewish History and of Mediterranean History.