Excavations in the neolithic site of Nahal Efe (Israel). Looking for the last hunter-gatherers-collectors of the Néguev, il y à 10 000 ans.

During the 5th and 6thth field seasons (March 2020 and December 2021) three more buildings (Units 5, 7 and 8) were discovered and excavated, as well as some outer spaces. These three sub-circular semi-buried buildings with stone walls and maximum diameters of 3.5 to 5 metres appear to be contiguous with each other. Interestingly, despite the similarities observed between them each building displayed some different and unusual (in some cases unique) features.

Unit 5 had the floor covered with lime plaster and parts of it were painted red. A plaster floor painted red had never been discovered before at a prehistoric site in the Negev, which made it a totally exceptional finding.

The most noteworthy aspect of Unit 7 is that once it was abandoned and its walls were collapsing, the place was used to bury three adult or sub-adult individuals. The chronology of the burial is difficult to determine since it is a negative structure but, in the absence of direct dates for the bones, it might be linked with the main PPNB occupation of the site or a later Pottery Neolithic period. In any case, it is an exceptional finding because very little is known about the funerary practices of Neolithic hunter-gatherer groups in the Negev and Sinai. Unit 8 is the largest building excavated at Nahal Efe (measuring 5m N-S and 4m E-W). Its state of conservation is outstanding with walls preserved, in some parts to its full height, 140cm on the west side, against the slope. It has a small internal room on the southwest side, a door towards the east, overlooking the wadi, and a central hearth. The floor of the building was prepared with lime plaster. This plaster floor was found covered by a very organic layer with an extremely abundant number of remains of charred wood (fragments of branches and logs) that has been interpreted as the destruction/combustion of the organic roof of the house which fell on to the floor. The finding of the roof of a building is quite unusual in archaeology and allows the architectonic materials and techniques to be determined for a part of a building of which there is normally very little evidence. In conclusion, the results of the last two seasons have provided valuable information to understand several aspects of the organisation of the PPNB village and has enlarged the cluster of residential buildings on the upper (west) part of the site.

The fourth excavation campaign of the Nahal Efe project supervised by Ferran Borrell from the Consejo Superior de Investigaciones Científicas (IMF-CSIC) and by Jacob Vardi, from the Israel Antiquities Authority (IAA) has occurred in May 2019 in the drought area of the Negev (Israel). The team composed of Spanish, French and Israeli archaeologists has undertaken a new excavation campaign of three weeks in the neolithic site of Nahal Efe, an archaeological project which started in 2015.

The first objectives of the project were the study of the dissemination process of the Neolithic period in the semi-arid regions of the .Mediterranean Near-East (Negev, Sinai and Jordan) and the study of the interactions between the last hunter-gatherers of these regions and the nearby communities that were fully agricultural in the Pre-Pottery Neolithic B (PPNB). Another objective was to study the relations between societies and their environment in intense arid conditions in order to figure out how change in the early Holocene has impacted the development of the first agricultural societies in the Mediterranean southern Levant.

This 10 000 years old site is probably the main establishment of its era for the entire Negev area. It extends an estimated area of 2000 m2. The habitat consists in semi-circular units with stone walls of three to five meters in diameter. Three of these structures have been excavated and a dozen have been identified, illustrating that the site has been a genuine settlement area. The preservation of the site is very favorable, the stone walls can be preserved at a height of about one meter.

The work realized the previous years has been focused on the identification of the site extent, the confirmation of its chronology and on the estimated quality of its preservation. The 2019 campaign has aimed the analysis on-site of the already excavated structures and their contemporaneity ; it aimed at understanding better the internal organization of the site and documenting the architectural construction techniques of big circular stone houses brought to light. This will lead to the first elements of analysis on the number of inhabitants in the site and their mobility patterns. This campaign has also been concentrated on the data related to the community livelihood in Nahal Efe, among which the sampling of botanical remains (pollens, phytoliths etc.), which are likely to become key elements of the palaeo-environmental restitution of the settlements’ environment. These elements will help apprehending which plant species were used by the Nahal Efe inhabitants as fuel and daily diet. 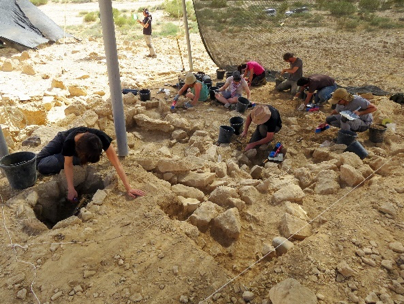 Most of the research realised is essential for studying and contextualising the community living in Nahal Efe during the Pre-Pottery Neolithic B. The output differs significantly from the previously accepted settlement patterns in this region that assumed the Negev was inhabited by little groups of nomadic hunter-gatherers. Indeed the data collected from the excavated site shows a high number of residential structures (potentially contemporary to each other) and a consequent investment in the construction of the habitat structures (stone walls and floors made out of gypsum!). These elements make us consider Nahal Efe as a relatively important settlement of hunter-gatherers with a most likely sedentary lifestyle. In addition, there are other indications - of a lesser importance – supporting this thesis, such as sickle blades typically used in the cereal cultivation (so far four blades) as well as a significant number of grinding tools.

The Nahal Efe is the only archaeological research project supported by Spain in Israel. It is funded by the Fundación Palarq, from Ministerio de Ciencia, Innovación y Universidades, from CSIC, de l’Israel Science Foundation, from Levi-Sala CARE Foundation and from the French Research Center in Jerusalem (CNRS-CRFJ).