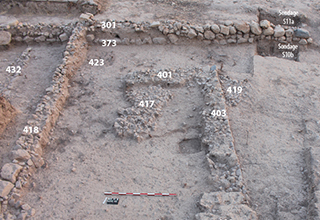 The French-Israeli mission of Beisamoun started in 2007 and is directed by Fanny Bocquentin (CNRS) and Hamoudi Khalaily (IAA). It explores one of the most important neolithic villages in the Southern Levant occupied in the VIII and VIIth millennium BC, located in the upper Jordan valley (Israel) near the marshy area of the nowadays dried up Houleh Lake. At the end of the VIIIth millennium BC, the Northern Levant population has undergone all the steps of neolithization (sedentary lifestyle, establishment of an agropastoral economy, invention of ceramics). The Southern Levant, so far interdependent with the Northern Levant, has known a different evolution: with the collapse of the pre-pottery ceramics B (PPNB), a major crisis arose as a consequence and precipitated the desertion of most of the villages established in the preceding period. The occupation of the territory during this transitory period (named PPNC or final PPNB) is however little known and documented. Though few major sites from this period on the Jordanian site are known at the West of the Jordan river, there are very little remains.
Yet the Beisamoun excavations indicate the village has not been deserted at the end of PPNB. Its occupation lasted until the middle of the VIIth millennium on the brink of the first emerging ceramics in the area. There is no break but a remarkable continuity of the occupation, an uninterrupted restoration of the preceding structures, a progressive evolution of the lithic assemblage, a discrete onset of the first ceramic production before the definitive desertion of the site. The PPNC doesn’t appear as a transitory period but as a cultural phase as a whole where traditions and innovations are interwoven.
The excavation of 340 m2 divided in two sectors documents the last levels of occupation of the village. Wall segments, low walls, land use, mass graves, sepultures, households, wedging, basins, concentration of objects, outside areas, levels of ground collapse, piles of rocks, etc., were excavated. These architectural remains are the most complete from the Pre-Pottery Neolithic C in the western part of the Jordan river. A lithic assemblage of more than 110 000 pieces was discovered among which 85% have been studied by Ferran Borrell. It is up to now the unique significant PPNC assemblage that enables a real analysis of the modus operandi at play and an evaluation of the previous and subsequent assemblages.
Finally, the 2016 season has been characterized by two exceptional discoveries in the oldest layers: residues from a wild boar, and two plastered human skulls. They help contribute to the symbolic sphere which up-to-now was little documented outside of the numerous graves excavated. In poor condition, the two plastered human skulls may however question several assumptions related to the Near-East symbolic system in the Neolithic era.

The Beisamoun excavation material is stored for purposes of study and preservation at the CRFJ. At the end of 2016, Marie Anton (PhD student of the Paris 1 University) has undertaken an anthropological study of the skulls and bones extracted from this site. The main results of this mission were presented during the lectures “Research at Beisamoun, 7th Millenium. New results and perspectives”, organised the 21 March 2016 at the CRFJ, with Fanny Bocquentin (CNRS), Hamudi Khalaily (IAA), Liora Kolska Horwitz (HUJI) and Elisabetta Boaretto (Weizmann Institute).